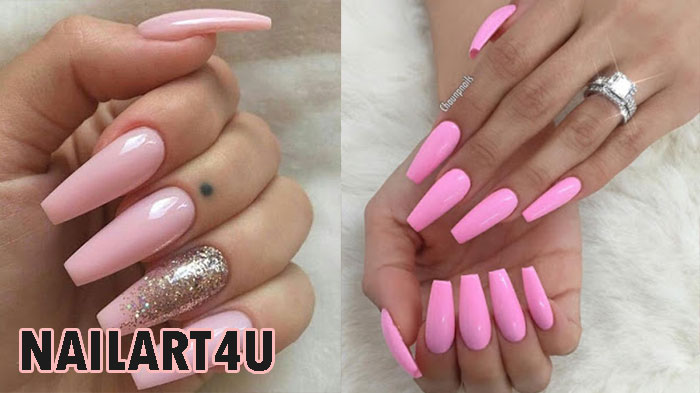 49 Rainbow Nails Ideas Just for You

Everyone likes pink and pink nail art and polish is the best but you don’t need to take my word for it, just take a look at these 10 Coffin nails art design.

Long Coffin Nails with Glitter is Very Beautiful to look at Especially and with the glitter, you really don’t need a lot of nail art designs are patterns to make your nails look great because the glitter along will sell them off.

Take these 3 simple signs, they look great and they are very easy to pull off, the fist coffin nail with glitter have only nail polish and glitter on it but the glitter gives it a unique look that makes the nail look polish and well design.

The Shape of the Coffin nails Is what brings it off and these Purple Coffin nails show you just how beautiful the shape is and this is why I think coffin design nails are always better long. I mean they do look good short but common you can’t tell me that these purple Coffin nails Don’t look amazing.

Here is an example of some short Coffin nails and even though these nails can be shorter this is as short as I’m willing to go with my nails, Plus nails that are shorter than this really isn’t coffin nails because shorter nails that this cant maintains the coffin shape.

These really long pink coffin nails with glitter look amazing plus the baby pink is a total win for me, now I know that most people will have a problem with long nails like these but they are worth all the trouble trust me.

Not everyone like bright pink and the color doesn’t always Work with every Outfit but if this is what you’re going for try and see.

OMG I love these, Having An Awesome Nails Design Is Great and all but sometimes Simple is better, Just look at these Pink nails, wow right and this is nothing but nail Polish with coffin nails nothing more

Other Types Of Pink Coffin Nails To Try Out

Other Types Of Pink Coffin Nails To Try Out

Pretty Pink Coffin Nails with no designs but really cute, this just shows that you don’t need much to make your nails beautiful.

17 Nails Design For Every day Use thats Cute and Simple

Pink Nails Are Wow So Cute

We hope you love the products we recommend! Just so you know, Nailart4u.com may collect a share of sales or other compensation from the links on this page. Oh, and FYI — prices are accurate and items in stock as of time of publication

49 Rainbow Nails Ideas Just for You

I accept use of cookies
PRESS ESC TO CLOSE